Skip to content
Is it really three months out?

Three months since someone cut into my head without me knowing much about it… other than I went to sleep and woke up 9 hours later.  And thank goodness for that!

When you try to summarize an experience like this, it’s a real challenge to get it all down at once in one fell swoop!  There’s the anticipation, the surgery (aka, the blackout), initial recovery, the following weeks, and then going back to work.  Some things went as expected, others were hilarious, and still others really, really stunk.

Let’s start at the beginning:

While we had been told Ashley and the baby would be able to go to the preop area with me, the hospital was adamant the day of that baby couldn’t go.  That was probably the most distressing part of the experience for me.  I know Ashley was upset, but Bernadette doesn’t like anyone other than Ashley and it was going to be bad.  Fortunately, my sister was able to get in there and strap her in and bounce her to sleep and Ashley found me and all was well before surgery.

The anesthesiologist was pretty funny beforehand as he told me that they were going to have to take care of me so I could get back to that baby.  I said, as they were giving me the gas, “That baby… you mean all 5 of the kids!”  To which he exclaimed, “WTF,” but all spelled out, not just the letters.  Made even more hilarious by the Scottish accent (and probably the gas).

When I woke up – and I’m still moderately ticked that no one had me count down from 10 – the nurse was asking me if I wanted anything.  Well, sure I did.  I just had surgery, so give me some ginger ale!  She brought me a little can with a straw and I blessed her and let her know she had a spot reserved in heaven.  She told me that my wife was coming up and I let her know I was glad and as the conversation about my wife progressed, I may have indicated Ashley had a mouth like a sailor.  Mrs. Nurse laughed and showed me that she just walked in the door.  Well, we let Ashley know about the conversation and she said, “Oh, $#!t,” and my response was, “See!?  She does!”

Supposedly I was a “learning moment” for one of the surgeons.  I guess the lead surgeon made the comment that they had to get me up and running to take care of those five little ones.  The guy that was currently in my head took the tools out and had some colorful language to express, to which the lead replied that, yes, this was a real person with a real family!

My best recovery story was the poor nurse guy that was doing my vitals.  I thought it’d be funny to scare him a bit with a “booga booga booga” while he was listening to my breathing.  Apparently it was funny for anyone that knew me… but no one else.  Everyone else thought something had gone wrong with the surgery and I wasn’t right in the head.  That may or may not be true, anyway.

There are so many other stories in the mix… walking with the walker.  Physical therapy.  Testing out of occupational therapy.  It was like a win all around in the life stories arena.  I’m not patient.  Sometimes I am… but waiting three months to get back to exercising was killer.  I’m still not really doing anything major until February, but that’s just around the corner.

The family is the real hero of the story, though.  Ashley is a saint.  That’s all there is to say there.  The kids actually toned things down for a little while.  My Mom and Pickle visited all the time and gave aforementioned saint a break.  Dad and Patti watched the kids through the whole hospital part and I’m going to guess the bulk of the prayers I was the beneficiary of originated there.  That isn’t to say there weren’t other prayers, for sure, and I appreciate those as well.  Meg visited and watched Bernadette when I went back at the hospital.  I think I might have freaked Robert out when he came down to visit (it was a pretty nasty scar).  Dave and Sandy watched Matilda for weeks and weeks until I could pretty well walk and balance all by myself again.  Even Aunt Carol and Aunt April came to sit with Mom at the hospital – which I didn’t know until a while later.  Who knew a little brain surgery would involve so many people?

There’s so much more to say, and I’ll get around to saying it eventually.

Here’s a quick shot of my scar now.  I wish it was a little more like the letter C, but you get what you get and you don’t get upset in cases like this. 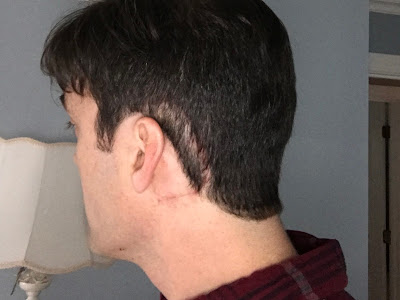